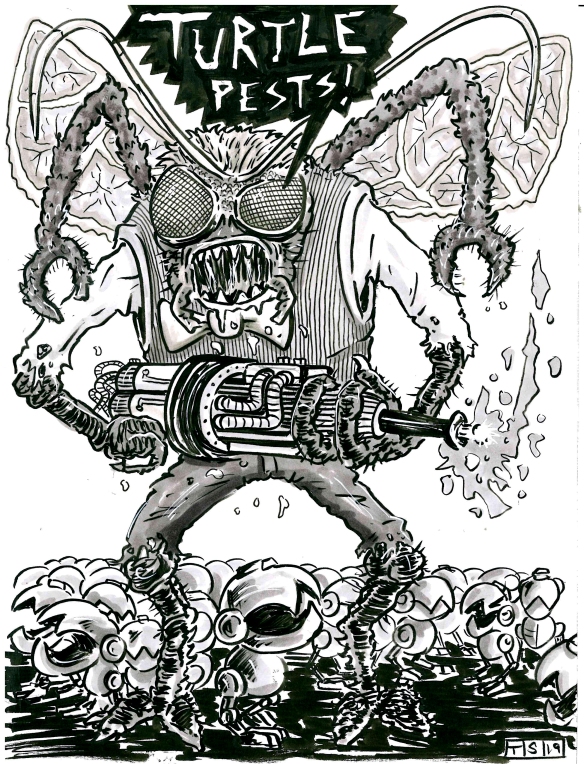 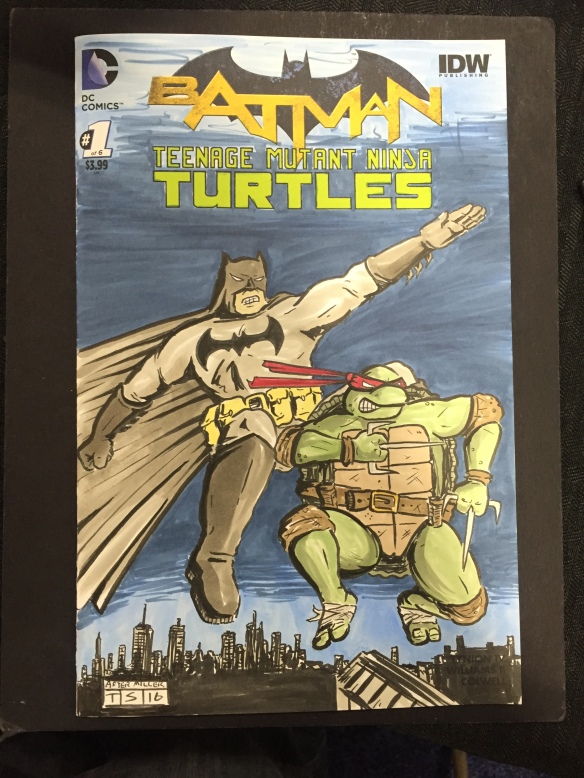 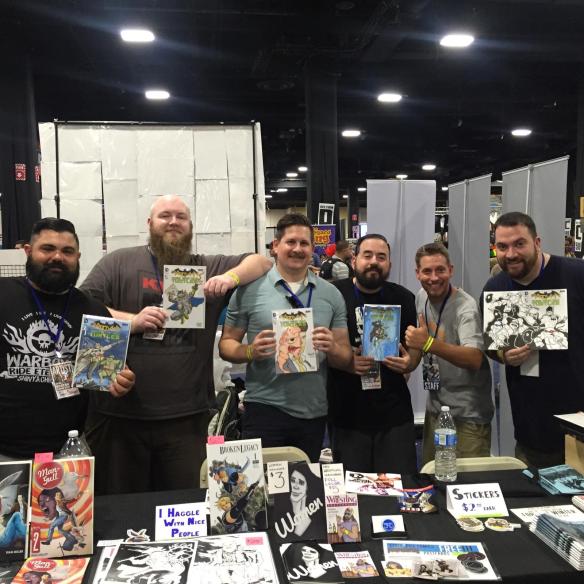 PIZZA TIME!
I rarely do color commissions anymore, but here is one I did this summer. 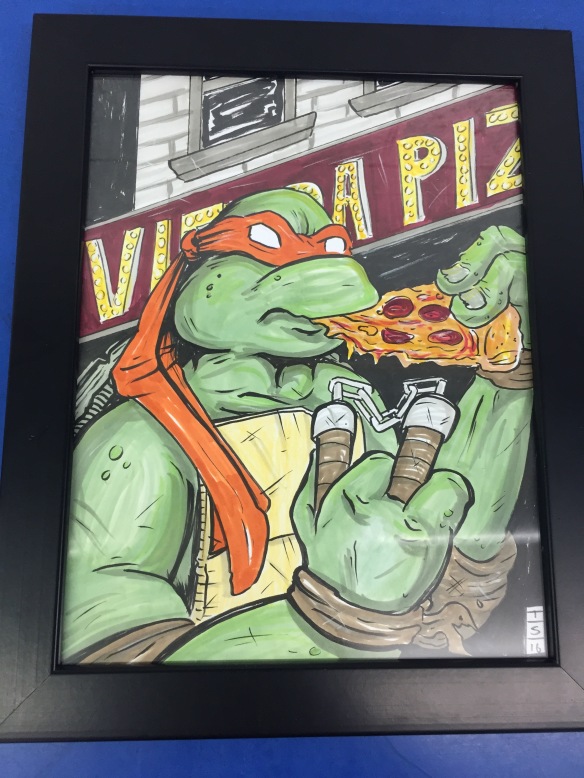 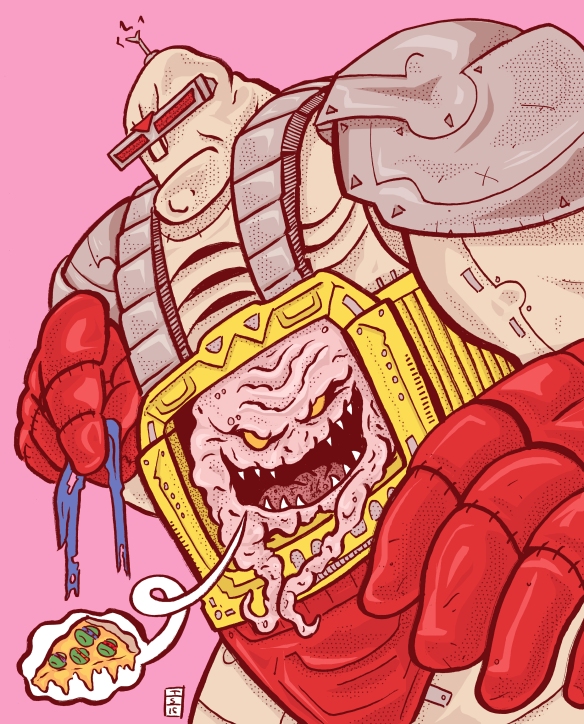 I will be at East Coast Comic Con this weekend!  And with the new year, I am going to have a brand new graphic novel, as well as a new Turtle print!  It will be 10 x 14 and will only be sold during 2015!  See you there! 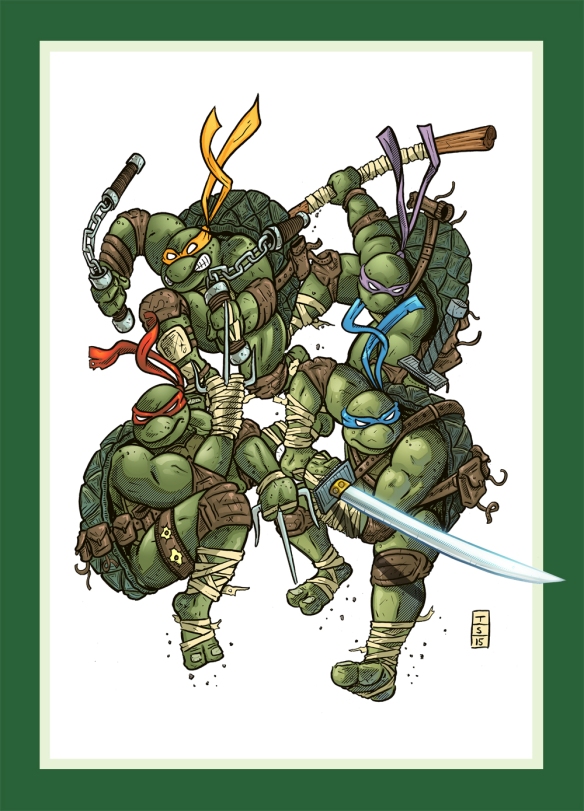 An illustration of the one, the only KRANG from TMNT! This is piece will be part of the BOSS KRANG Gallery show in Florida next month!  If I lived closer, I would totally be there like “awesomeness on Krang”! 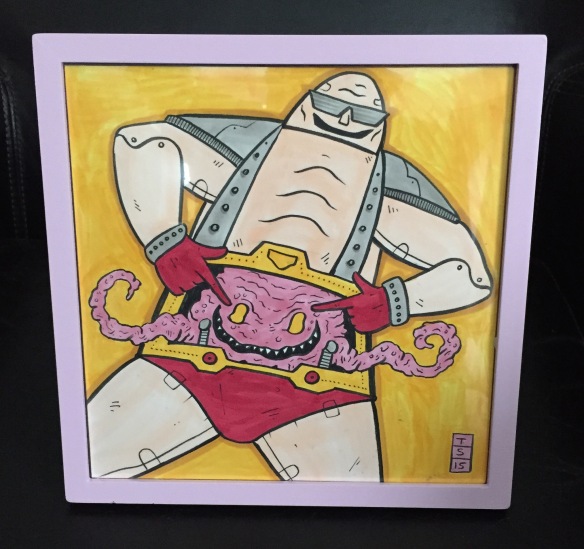 Here is a new drawing of the Turtles I did. I will turn this into a print for the upcoming convention circuit once it’s colored.. Anyone interested? 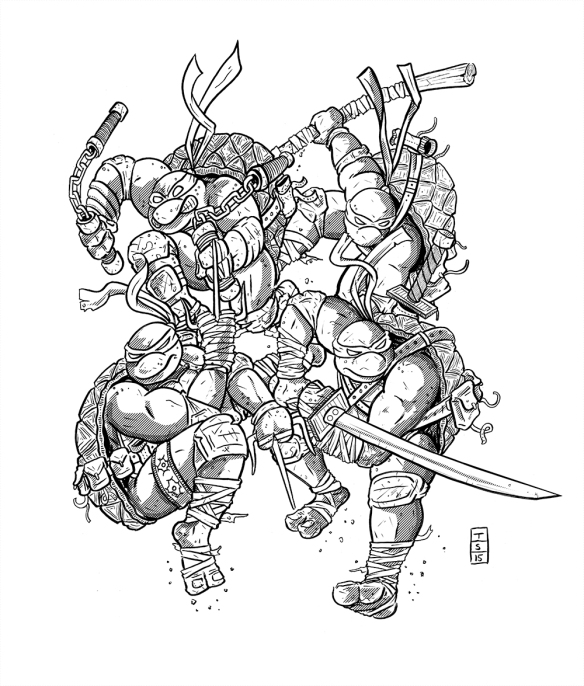 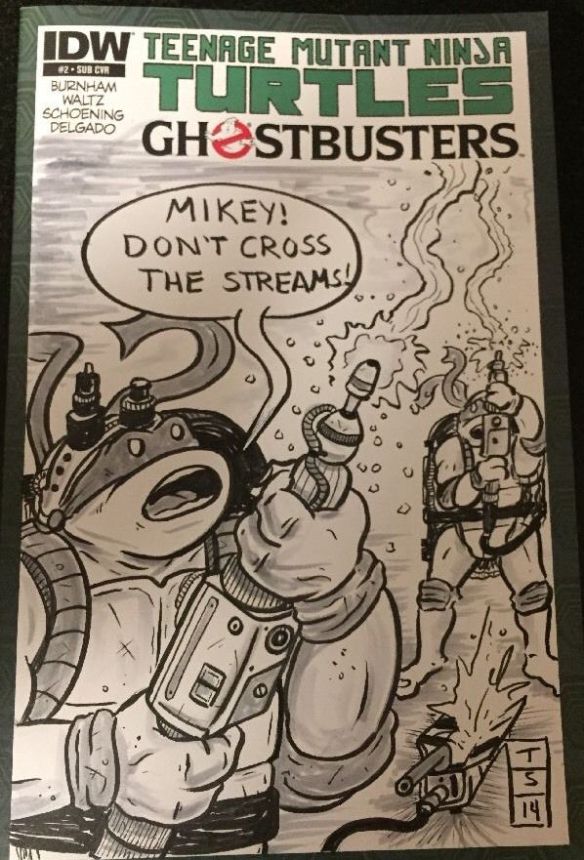 HAPPY NEW YEAR!!! 2015 is here, and I plan on doing awesome stuff this year with my art!

Another Leo sketch. Ink on Bristol. 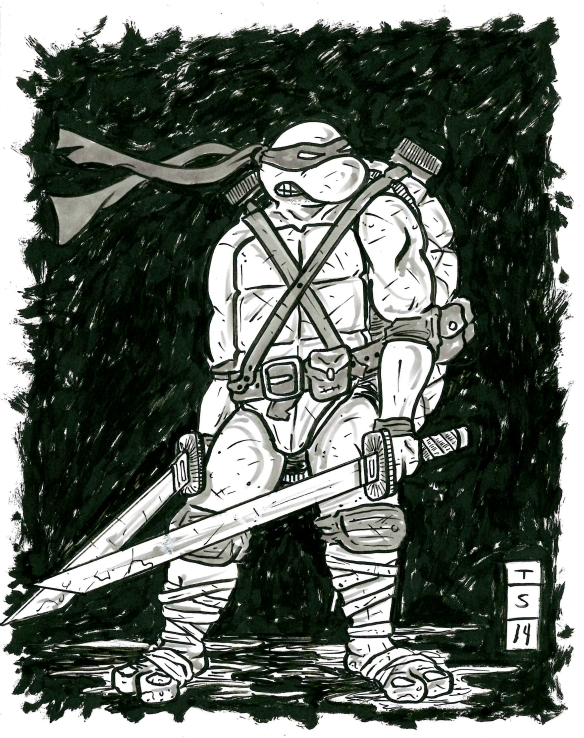 He uses a stick!  Buy some turtle sketches at my store! http://www.sedani.storenvy.com 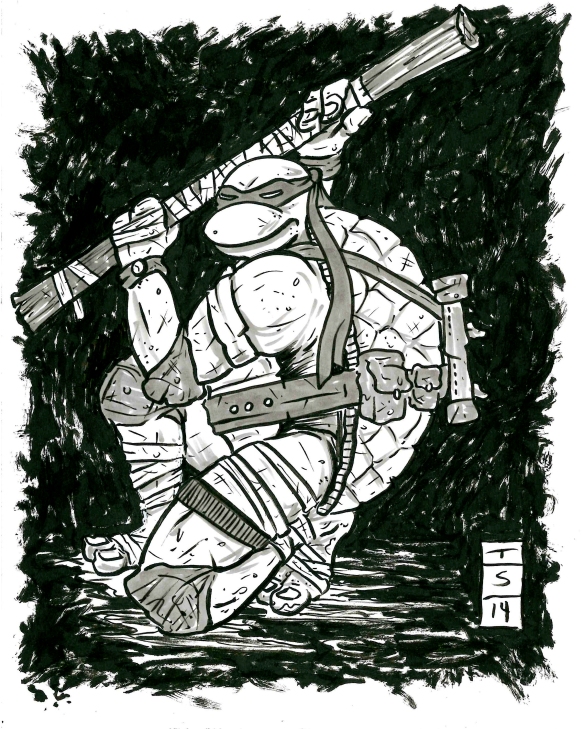 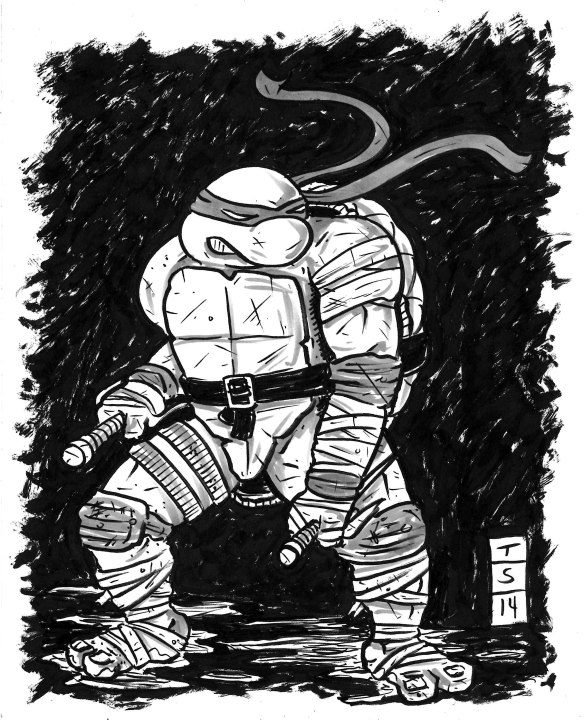 Here is some big turtle who uses nunchucks. He’s like famous for kicking ninjas asses. 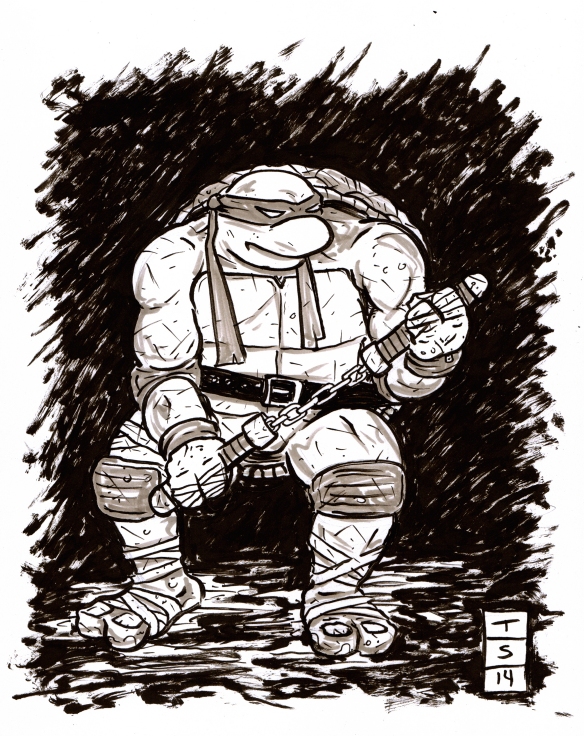 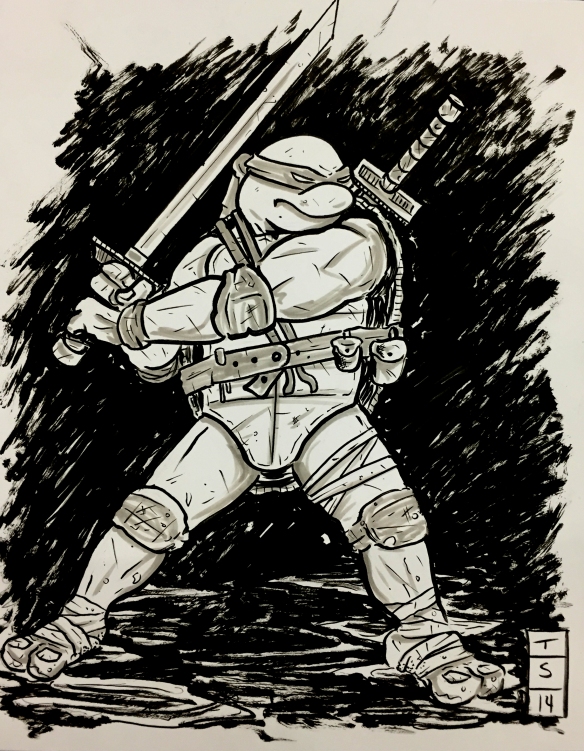 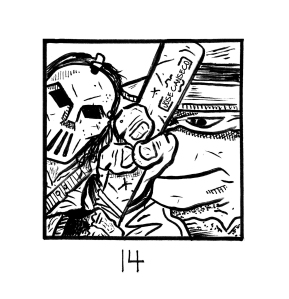 Yes, here it is, on of my favorite movies ever.  You all know my dislike for the new TMNT film and this isn’t the forum to bash it. This is a place of happiness and appreciation of a “good” TMNT movie.  The original took it’s source material, not from the cartoon, but from the dark gritty comic.  We are given a very aesthetically dark New York City, a gross grimy sewer, and a really brutal villain in The Shredder.  The story gives us a lot of unique character personalities including Danny who we can follow between the foot clan and the turtles. April has a take no shit personality. The four turtles are all distinct and have a believable relationship amongst each other.  Casey Jones, who looks badass.  The Shredder who looks doesn’t shed emotion until pushed to the point.  And the foot clan, who are traditional ninjas that train kids to join the ranks.  It all works together so well, and you get a real sense of fear in the climax on the roof.  The sequels were clearly geared toward the cartoon fanbase, but I am so happy that we got this film, this perfect perfect film.  TURTLE POWER!

Thought I would draw my favorite villain. The Shredder!  I decided to mess with the colors a bit.  Reduce the blades he has on his equipment to more realistic sizes. Drawn and inked traditionally, colored digitally. 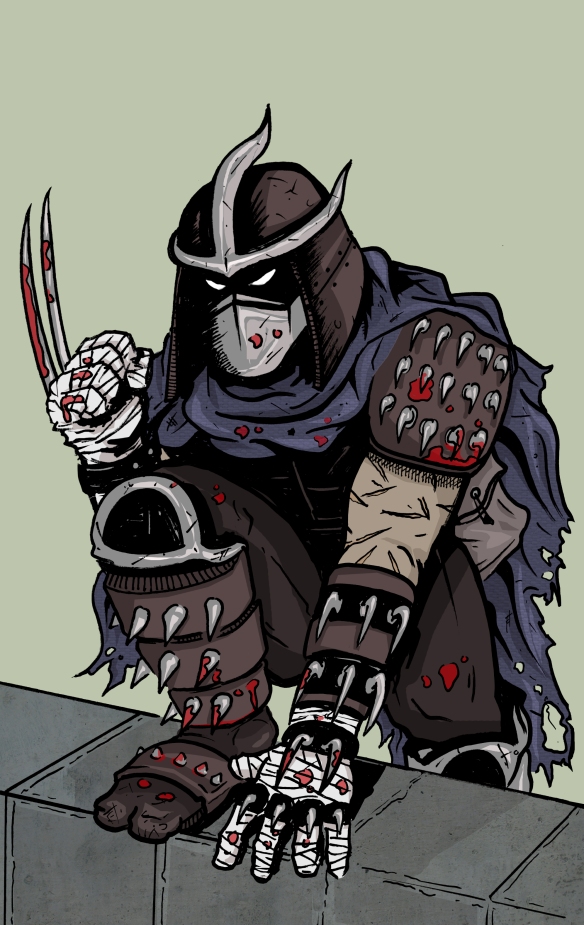 What’s up folks.  Here is a Ninja Turtle piece that I drew in pencil then scanned, and vectorized in Illustrator.  I wanted to do something simple and colorful.  If you are old school, you will notice that the mouths represent the same ones from the original action figures.  I will be selling this as a print at Granite State Comic Con this weekend!  Come to Manchester! 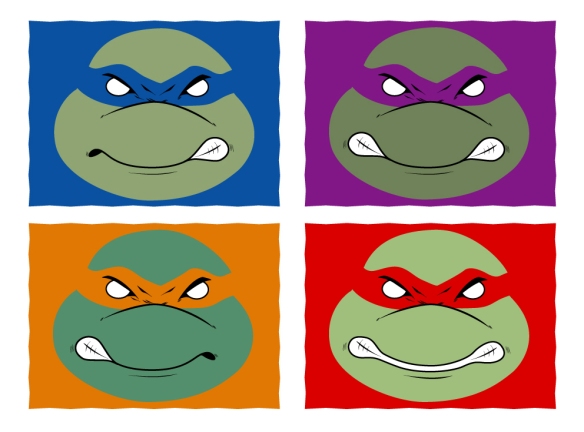 Just doodling before I fly out to Maryland for SPX tomorrow!  If you are in the Maryland area, check out the Small Press Expo in Bethesda Maryland this weekend at the Marriot Hotel.  See you there! 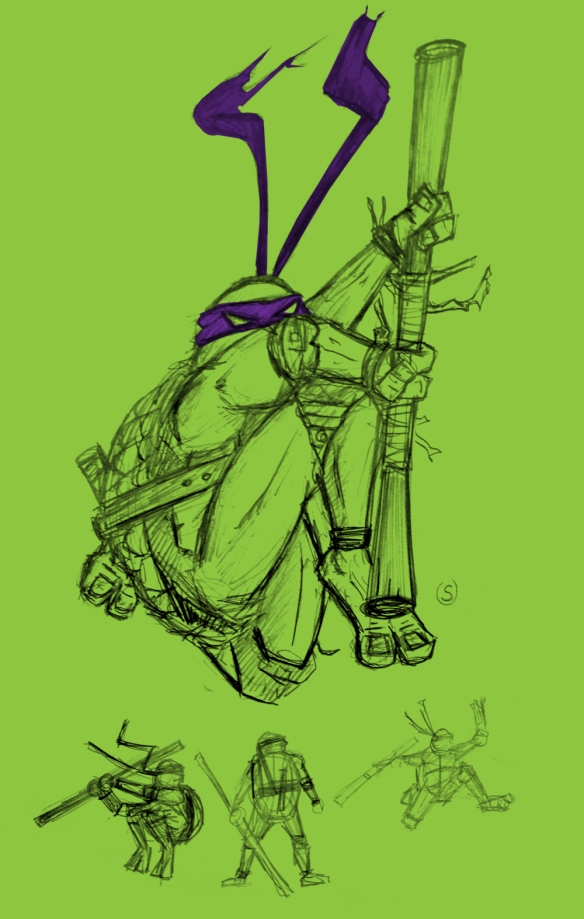 Here is the TMNT piece I did for a Pummel match, but now in magnificent COLOR!!!  Marvel at the vast array of the spectrum.  Let me know what ya think! 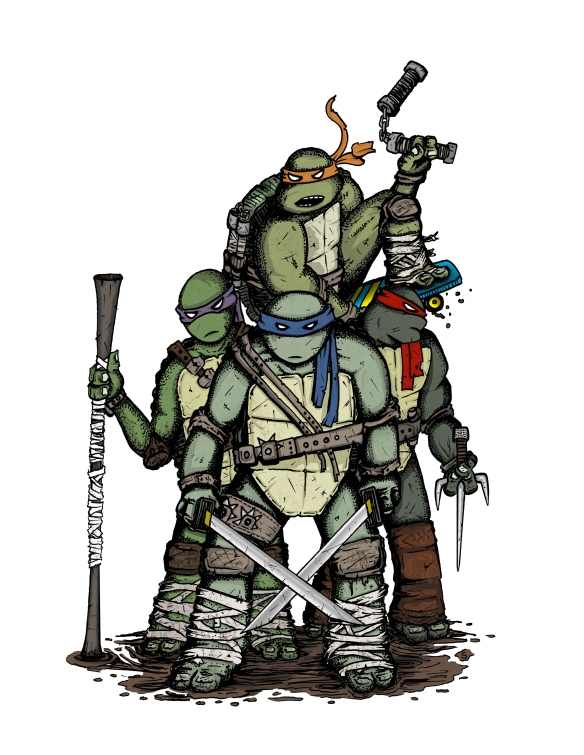 Here is a piece I did recently for an online art battle.  The 4 turtles inspired by the new cartoon designs.  These are the inks, a colored version will follow soon! 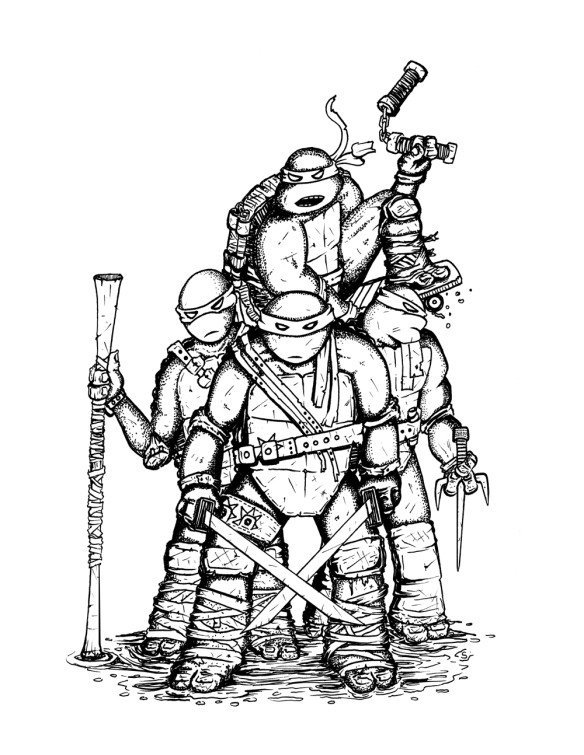 Just some recent sketch cards I have done… can’t do just 1 turtle gotta do all 4! 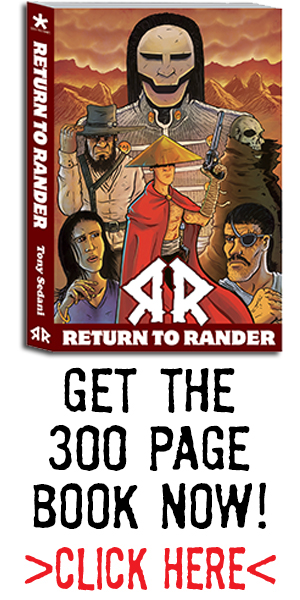